From Windmill Software, prolific developer of arcade clones comes Conquest, a nice twist on classic Joust. Trixter said it all in his review at MobyGames:

Conquesthas oversized graphics, which makes it much easier to connect with enemy players. There's no doubt as to where you stand in relation with an enemy. The sound is also very good; the Pterodactyl "screech" is amazingly good, considering it's coming out of a PC speaker.

The same oversized sprites can work against you; it's harder to avoid enemies, and it takes a lot of practice flying to avoid hitting the scenery all the time.

If you're looking for a Joust clone that isn't as harsh as the original Joust, Conquest fits the bill." Yet another solid entry from Windmill that unfortunately did not get as much attention as Digger, Windmill's most famous game. 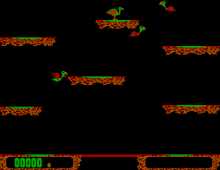