Connaone is a fun freeware action game based on Korean cartoon of the same name. You are Connaone, a rowdy, tough youngster who has been jailed for countless misdemeanors and petty theft charges. Your goal, of course, is to break out from prison -- hurting countless enemy gangs and representatives of the authorities in the process. Although the game is in Korean, you wouldn't have any problems guessing what to do next, since gameplay is based on the straightforward attack-everyone-in-sight modus operandi. One of the best things about Connaone is the variety of levels: most styles of action games are used in this one, from a one-on-one side-scrolling fighting scene, to a platformer-style level and even some first-person action thrown in. The Korean comic character is famous in Korea for his nasty, unique attacks such as spits and worse, and all these are faithfully presented in the game. Fans of Beavis and Butthead in the US will feel at home here -- Connaone looks and acts like the duo's long lost brother ;)

With a good variety of action, solid gameplay, and a unique sense of humor, Connaone is a great fanmade game that more people should know about -- and given the game's limited distribution, that practically means everyone outside Korea ;) 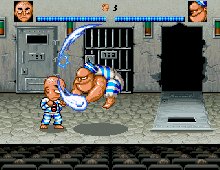