Dynamite Headdy is an excellent and unique platformer for the SEGA Genesis console that has the same trademark zany sense of humor and creativity that characterize all Treasure games. In this one, you play a robotic ant who attacks enemies by shooting his detachable head. The game's story is negligible and sometimes confusing, but it's the action that counts - and here the game truly shines.

Although not quite as captivating as Gunstar Heroes, arguably Treasure's best game, Dynamite Headdy has all the qualities of a classic game: colorful and smooth graphics, imaginative enemies and bosses, cool weapons, and tons of special effects. Like other action games from Treasure, Dynamite Headdy offers a lot of variety and surprises. There are many head upgrades you can pick up to increase your bashing power, and the bosses are very wacky and creative to say the least. You can shoot your head in any direction (including diagonally), and similar to Mega Man's boomerang, your head can change direction in mid-flight to track your movement. Controlling the head is key to winning the game - and that requires a lot of reflexes.

With wacky humor, lots of cool head upgrades, many surprises, the zaniest boss monsters ever designed, and nonstop action, Dynamite Headdy is a must-play for fans of platformers. It's not as timeless as Gunstar Heroes, but it's a very, very good game. 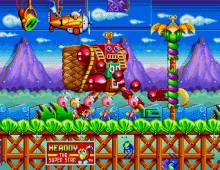