Dinosaur Balls (better known as Pang outside Asia) and Super Bubble Mania are fun, cute arcade-style games that boast identical gameplay despite being made years apart by two different companies. In both games, you control either a boy or a girl who has to pop balloons that bounce around the screen, against pretty backdrops (dinosaur graphics in Dinosaur Balls justify the name, although it has nothing at all to do with gameplay). When you pop a balloon, it splits into two smaller-sized balloons, so you must continue to pop them until they are small enough to disappear. You pop the balloons by shooting arrow rays upward, while at the same time trying to avoid being hit by them. Although the game is quite difficult, the arrow rays you shoot stay in the air for a while and can destroy any balloon that comes into contact, making your job a bit easier because you don't have to aim that well. Two players can play together in hot-seat mode, and there are many bonus items to collect (my favorite is the one that freezes all balloons on the screen for a few seconds).

Released five years after Dinosaur Balls, Super Bubble Mania upgrades the graphics and adds more gameplay styles including "crazy mode" where you must contend with balls of different shapes and physics, and "mania mode" where huge balloons make the game much more challenging. Overall, both games are well worth a look, but be warned that they are far from easy -- you will soon find yourself running away from dozens of tiny balloons that bounce wildly across the screen. Fun, but I find Pea Shootin' Pete more varied and manageable than these two old games. 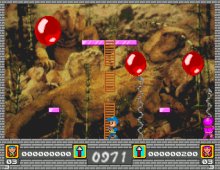 People who downloaded this game have also downloaded:
Connaone, PANgIC Plus, Gold of the Aztecs, Chickie Egg, Jazz Jackrabbit