Gold of the Aztecs

When it first came out in 1989. GOA was a real hit for Amiga and Atari. It had great graphics and an original soundtrack. You play a role of a single adventurer in search of the ancient Aztec treasure. It includes some great puzzles as well as a lot of action. Be careful and avoid encounters with wild animals. Sometimes, try NOT to kill every single Aztec or animal You encounter, and try to be fast, or You may regret it. For example, I stayed too long in the first screen and an elephant came in. The bad thing about it is that it can't be killed!!! Good hunting... Note: There is a copy protection in this program. It is very confusing, but I'll do my best to make the best possible instructions for use: Print out the code.txt file. There are TWO parts that need to be cut out - big and small part. Small part has # symbols that also need to be cut out. When You get a code such as G-S-3-? You need to find G on the big one, place it NEXT TO S on the small one, find 3 on the end of the small one (there are numbers on the end of some rows on the small one) and then look for the CUTOUT # in the same row where 3 was. There will be a letter under it. I hope this makes sense since it is VERY complex.

Another Atari/Amiga hit that failed to attract PC gamers' attention. Gold of the Aztecs is a fun action/adventure game set in South America. The mundane plot casts you as another unfortunate pilot-turned-adventurer who crash-landed in the jungle, destined to discover ancient Aztec treasure on your way to freedom. The game is played from a typical side-scrolling view with some novel features. For instance, unexpected enemies (e.g. a huge elephant, or cannibals) will appear if you dally too long. The weapons are few, but reasonably realistic, and once you discover Aztec ruins, you will have access to some interesting mythical weapons and items.

The adventure elements of the game, while exist, are not as developed as, say, Silmarils' underrated Le Fetiche Maya. Puzzles that require inventory items are far too easy to solve, and most of your time will be spent on figuring out how to deal with various nasties anyway. Although numerous, the enemies appear quite realistically (i.e. you won't get run over by hordes of elephants that appear all at once, and cannibals have believable attacks). Sometimes you must figure out how to kill an enemy by observing their movements-- this is similar to Out of This World, and a lot of fun. Overall, if you like action games with some adventure elements, Gold of the Aztecs is one of the better ones you will find. Recommended! 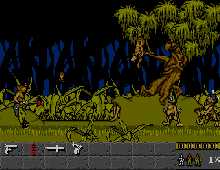 Gold of the Aztecs screenshot