I was in my early teens when Jurassic Park was released in cinemas and can easily remember the mania that surrounded dinosaurs at the time. A game based on the film just added to the hype. If a developer were to convert Jurassic Park into a game now, they would probably make it into a graphic adventure, using all the technology and digital wizardry at their disposal. In 1993, they made an action game with dubious graphics that involved you, Dr Alan Grant, killing things, and trying to rescue brats Tim and Lex.

The good thing is that OCEAN at least tried to be original. The first part of the game involves finding Tim and Lex and returning them to Granddad. Think of Al-Qadim and you'll have a reasonable idea of what the graphics look like. The second part of the game involves restoring power to the park so guests can get the hell out of there. The difficulty level of the game progresses in a non-linear probability curve - imagine a hill growing ever-steeper, rather than a step for each of the six levels. The game includes some puzzles, a nice change from dinosaur-bashing. Graphics in the game are acceptable for the year it was made, but nothing really ground-breaking, and the sound effects won't leave you quaking like they may have in the cinema.

A fun overhead action game based on best-selling book and film, OCEAN's Jurassic Park is based on the hit movie of the same name that, in turn, was adapted from Michael Crichton's best-selling novel.

The game starts off when the action begins to heat up, i.e. after the dinosaurs are loose. As none other than Dr. Alan Grant, world-renown paleontologist, your goal is to find Tim and Lex, two kids who are lost on the Jurassic Park island which has been overrun by hungry carnivores. In the process, you must fight off scores of dinosaurs and destroy their eggs to stop the breeding. You start off with a powerful gun that shoots electric rays that can kill pesky Triceratops in a few shots, but is almost useless against their meaner cousins, such as the Brachiosaurus. Fortunately, you will soon come across more powerful weapons, different types of ammos, and even time bombs that are used for blowing up Raptor nests.

Although the game has only 6 levels, they increase both in difficulty and length, making the game a good match for joystick experts who scoff at easy games. There are also some puzzle elements within the game, such as accessing the computers to open electrified gates, or figuring out how to kill the gigantic Tyrannosaurus Rex. Two players can also play together, and each level helps advance the game's (and movie's) plot. Overall, Jurassic Park is a highly enjoyable game for veterans, although it might frustrate beginners. Too bad OCEAN's later Last Action Hero, which was based on the same engine, isn't nearly as fun as this old game.

In this adventurish game you have to get out of Jurassic Park. This game is based on the famous movie which is based on the book written by M. Crichton. You run around with you stungun, with which you can take care of some dinosaurs. Of course you have to save other people and do lots of different actions. 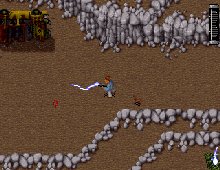 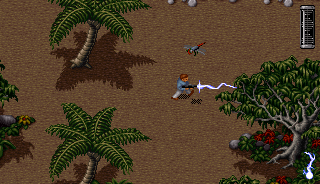