Ninjas were always feared by eveyone, even the noble Samurais. But not even they are unbeatable. Evil Shogun Kunitoki wants to get Ninja powers and combine them with his own dark powers in order to rule the world. During one annual meeting, he summons evil forces on the Ninjas and kills them all. But one of them survived and is getting ready for the vengeance!

Every true fan of Commodore 64 games remembers this game. It is a true legend and together with it's two sequels makes a great collection for eveybody. The graphics are great and so is the action in the complete game.

There are also some puzzles to solve but not as many as in Last Ninja 2 or 3.

A nice little fighting game I remember from my C64. Somewhat weak controls, but when you get used to it it's not bad. The story's simple - you are seeking revenge for your clan that's been brutally slaughtered. As the last survivor you set out to beat up the bad guys. On your way you pick up some useful things such as weapons. Might be fun for Martial-Arts-fans and maybe worth a try for people who just like Action-games.

One of the most well-executed action games of all time, The Last Ninja is a great start of a great series that was a huge hit on the Commodore 64. This PC port is excellent, but unfortunately was not commercially successful.

The Last Ninja deserves notice not only as a thoroughly addictive action game, but also for the many innovations it brought to the genre. For starter, the game is one of the first isometric games on the market. Despite relatively primitive (EGA) graphics, characters move convincingly, and backgrounds are well-drawn to create good illusions of 3D landscape. Also, while other action games at the time offer only one type of combat, The Last Ninja features a mixture of hand-to-hand and ranged combat, with a variety of authentic ninja weapons. Another nifty innovation is the fact that the game's terrain is merely not the non-interactive pretty scenery as in most other games: they are obstacles that must be overcome. This is where the game can discourage action newbies from completing it. Not only will you have to deal with hordes of enemies constantly, but you must navigating around fatal features of the terrain. One of the most fatal is the *water* -- while your ninja can execute a staggering number of movements and attacks, he cannot swim. Thus, the game became incredibly frustrating as you move your Ninja pixel by pixel across the swamp and river terrain, trying to get that EXACT placement for the EXACT right jump from boulder to boulder.

Despite this contrivance, though, The Last Ninja is outstanding in every respect. Too bad the great music in the Commodore 64 version is not present in this PC port (due to PC speakers limitations), but otherwise it's an excellent version. Definitely a must-have for all action fans, although anyone who found Prince of Persia difficult should think twice about attempting to win-- this is a much harder game by far. Recommended!

Ninjas rock! You know it's true!

The Last Ninja however sucks large amounts of buttock. Surely his elite martial arts training extended to "how not to die when coming within 3 feet of water" or "how not to miss a jump just because you were one micron off".

Anyway, your clan (ninja clan? who knows) has been brutaly murdered and it's up to you to avenge them.. yadda yadda yadda. The game is an action/adventure hybrid that takes place from an isometric viewpoint across a faux-japanese landscape (the effect works well actualy). You must jump (waaaaay too much emphasis on this) fight and solve puzzles in order to reap bloody vengence on your enemies. Speaking of which, one area that Last Ninja does excel in is weaponry. Along with regular punching and kicking you can get access to a sword, nunchakas, a staff, smoke bombs, throwing stars.. and all those other thingies that make life groovy ;) HOWEVER, it's a bit of a let down that the control system is so dire, meaning that actualy using your weapon is a lot harder than it has to be.

To be honest I remember the game being a lot more enjoyable on 8-bit systems (the C64 and ZX Spectrum).. maybe i'm just getting old ;) Nevertheless, once you get used to the controls and the pixel-perfect precision that the game requires you may enjoy it. 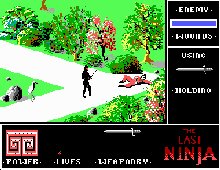 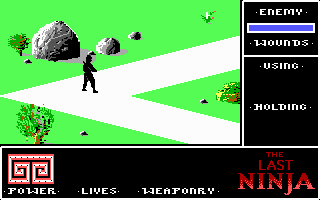 People who downloaded this game have also downloaded:
Last Ninja 2: Back with a Vengeance, Jurassic Park, Immortal, The, Goblins 3, Gobliiins