Last Ninja 2: Back with a Vengeance

Our dear Last Ninja destroyed Kunitoki's forces on Lin Fen Island, but the master fled to the great city of New York. Now Ninja spirits have sent our hero through time and space and into NY. Will Ninja's finally get their vengeance?

The game is very much alike the first Last Ninja but it now has a bit more puzzles. You will fight on the streets of New York, the underground and the secret base of the Shogun.

Well, if you've played the first part you basically know this one. Concept is the same, graphics have slightly improved, but the sound got a bit more annoying. The controls are a little bit better, but that doesn't mean much. They only seem to be a little more reliable, but I guess you should expect that from a fighting game. Anyway - the surroundings changed, looks like New York to me. No idea about the exact background story - I have to be honest. But I can't seem to find big differences to the first game in gameplay itself. Judge yourself.

A great sequel to one of the best Commodore 64 games ever made that failed to attract attention of PC gamers. The Last Ninja 2: Back With a Vengeance offers more of the same addictive gameplay that made its predecessor a classic, plus a few new features that will please both longtime fans and non-action gamers alike. Although you still control Armakuni, master ninja from the first game, the plot is no longer set in 9th-century feudal Japan. Armakuni was plucked from his own time by a mysterious pulsating light that deposited him in 20th-century New York City. As he struggles to make sense of his surroundings, one thing remains clear: he must try to find his arch-nemesis, Evil Shogun Kunitoki, and vanquish him once and for all.

The game is played from the isometric perspective, like its predecessor. In addition to new weapons and terrain hazards that must be negotiated, designer Mark Cale added interesting adventure-style puzzles that are seamlessly integrated into the game, and elevate it above the mundane kill-everything-in-sight exercise to an adventure where brains are required to succeed. Most of the puzzles are physical, i.e. they require manipulating the environment, although a few are items-based. This extra layer of challenge doesn't mean the action focus is weaker, though. On the contrary, you can execute a wider range of movements than ever, and that somersault action is much smoother, thanks to improved graphics.

There are many new enemy types, as well as useful items (such as a map that will briefly show items of interest on the level, including hidden ones). Armakuni still can't swim (no time to learn, apparently), but at least the water-crossing sequences are few and far between this time around. With great gameplay, imaginative level design, fun interactive terrain, and many hidden surprises, The Last Ninja 2 surpasses its predecessor with shining colors. Highly recommended!

Having defeated his enemies in the first game, Mr Last Ninja rebuilds his ninja school... then something happens and he is transported to present day (well, 80's) new york.. and theres a baddie and... oh I can't be bothered. If you've played the first game then this is more of the same, with slightly improved graphics and a more interesting setting. 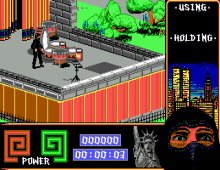 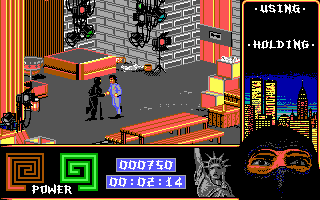 Last Ninja 2: Back with a Vengeance screenshots