Ecco The Dolphin is the rare Windows 95 version of SEGA's first game in a classic series that began life on the SEGA Master System in 1992 and is still going strong, with sequels appearing on the Playstation 2 and Dreamcast consoles. Undoubtedly the most unique game SEGA ever created, Ecco The Dolphin is a charming action/adventure game that calls itself a "dolphin simulator" and largely succeeds: you can do just about everything a dolphin does in real life such as catch fish, surface to breathe, use a cool biological sonar, and perform above-water acrobatics to amaze friends and foe.

In contrast to most action games, the storyline in Ecco is actually quite interesting and unfolds with exciting twists and turns along the way. As Ecco, you are the only dolphin who is able to save the life of Asterite, your mystical mentor who has been shattered by the Vortex queen. To do this, you have to travel through 100 milion years of time and space via the Atlantean time machine.

The game features over 25 levels of undersea exploration, each of which is beautifully rendered. Freedom of movement, unlike platform games, is almost unlimited: most of the time you can take the time to explore the huge level, taking in the sights and sounds while avoiding the dolphin's natural predators and other dangers. There are many surprises in the game, and the blend of adventure-style puzzles is tasteful and seamless. I don't want to describe the puzzles too much lest I spoil one of the most pleasant highlights of this game, so suffice it to say that you can touch the glyphs to get hints about how to achieve each level's objective, and sometimes all it takes is sonar in the right place ;) The game is quite difficult, but the difficulty lies more in figuring out what to do, than something that requires superhuman reflexes. This means fans of exploration/adventure games should find Ecco a captivating game that is a refreshing change from the norm. If you like creative action games or just plain unique games in general, this game deserves a spot in your collection. SEGA hired Novotrade to convert the SEGA CD version of the game (which in itself is a vast improvement over SEGA Genesis version) to Windows 95 and 3.1 formats in 1995. This PC version features better graphics than its console counterparts (256 as opposed to 64 colors), full CD soundtrack and video sequences from the SEGA CD version of Ecco: The Tides of Time, and even a mulit-language support. This means that the PC version is probably the best version of the first game in the series - a fitting and competent job on one of SEGA's best games. 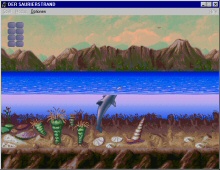