Command Adventures: STARSHIP is a decent space combat action game that plays similar to Accolade's classic Star Control 2, but without the intricacies of any storyline to get in your way ;) Well, okay, there IS a plot, but it's tangential at best: it is the year 2127 galactic standard time, at the close of the Galactic Wars. You purchase a starship to explore regions unknown and extract untold riches from distant galaxies. Your treacherous enemies plot revenge. Pirates and bloodthirsty alien beings wander the universe, randomly attack ships like yours, plunder peaceful planets and kill without warning. It is a gritty, nasty time. You will not let that dater you. The time is now to bravely go forth, to explore and seek your fortune! Your mission as starship commander is one of acquisition. You are hired by your civilization's government to establish a foothold on planets that were unclaimed after the war.

Okay, now that we've got the very sappy plot out of the way, we can get into the nitty gritty of how the game plays. It's quite an interesting and varied game, although I found the interface a little too hard to get the hang of, and the combat a little too repetitive after the first few battles. To the game's credit, though, it has many features that no other game can boast. The best feature is the randomized world: it's never the same game twice in Command Adventures, since the game completely regenerate the universe every time you play. You can also custom-configure more than 50 ships to your requirements, with more than 80 weapons, shields, and engine systems. The gameworld is vast: over 50 worlds awaits your fleet, with six different types of textured-mapped planetary surfaces. Ultimately, though, I find the game too repetitive and shallow for my taste for lack of strategic overlay. But if you like action games with minor elements of strategy and an excellent ship design interface, Command Adventures may fit the bill. 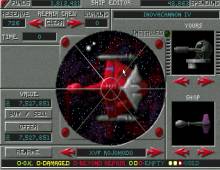