Chasm: The Rift is a marginally above-average first-person shooter that would have probably been better known had it been released before the likes of Quake II and Jedi Knights. Like most 3D shooters, Chasm incorporates only a vaguely thought-out story. There are different "rifts" in time, and aggressive creatures from the past, present and future are infiltrating our time. You must attack and kill these "time strikers" and investigate what is going on. Translation: you walk around basic levels killing everything in sight solving puzzles no harder than pushing the right buttons to open doors. Before each mission, a funny-looking commander briefs you. These sequences usually involve watching two animated people talk and can't quite match up to the high-quality FMVs out there today.

The most commendable aspect of the game is the monsters. Chasm has 16 original enemies from various time periods. These range from basic scorpions to alien captains. There are also 4 masters: the Sarcophagus, who has a surgically implanted chainsaw arm and rocket launcher, the Phantom (two swords and a fireball), a Sphinx and a Time Judge. Another interesting aspect about the enemies is that different parts of their anatomy will fly off as you fire at them (get your mind out of the gutter, not those parts). Arms and heads will fly different directions during the heat of the battle, depending on where they are shot. Enemies have a descent polygon count, smooth animations, and are pretty original in concept.

At 640-by-480, the maximum available resolution, Chasm looks attractive enough, though not nearly as lavish as GLQuake or even Jedi Knight. Support for 3Dfx-based cards or even Direct3D would help. Overall, it's just too bad Chasm wasn't released a year before it came out—in 1996 at the time of Quake, it would have proved a worthy challenger to the 3-D action throne. It is a pity that the developers took months to find a publisher, and months more to complete it. As it stands, Chasm is just a poor man's Quake that would be a must-buy if Quake and its brethren were never made. Enjoyable, but there are many better FPS out there—recommended only if you have played every other FPS on the market ;) 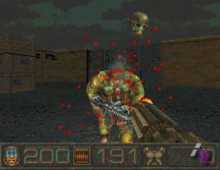 People who downloaded this game have also downloaded:
House of the Dead 2, The, Kingpin: Life of Crime, Daikatana, Freespace 2, Blood 2: The Chosen