Captain Quazar is a fun and little-known game from now-defunct Studio 3DO that combines the frenetic fun of Atari's classic Berzerk with the wacky cartoon humor of Gunstar Heroes. The plot: as galactic Captain Quazar, your quest is to rid the galaxy of a gang of crimelords. The game is similar to Origin's Crusader: No Remorse, except the style is decidedly cartoonish. Mission takes place on a very large smoothly-scrolling map, where you view the action from an isometric perspective. There are over 10 missions in the game, many of which will take more than a few hours to complete.

The game's cartoon feel is very well created, thanks to an abundance of cut-scenes featuring claymation characters (missing from this CD-rip, unfortunately), crisp animations, and creative designs of all the evil gangsters. Like any good action game, you've got massive explosions, a wide variety of appropriately wacky weapons. The background graphics in each level deserves special mention for being very detailed, and the action is nonstop. It's like playing Atari's classic arcade game Berzerk, except with bigger levels, bigger guns, and cool isometric view.

In addition to the standard action fare, you also have a number of cool features in Captain Quazar that are not commonly seen. For instance, you can get information from eager-to-help prisoners, check your progress on mission logs (although sometimes it is unclear how to achieve certain objectives), use cash and gems to buy stuff from armory "shops," play in a 2-player mode with a friend controlling Lieutenant Pulzar, and even get a constant (and almost always funny) radio updates from your boss.

The two-player mode is limited because both players have to stay onscreen - there is no split-screen mode. The controls are also clumsy and not easy to get used to at all. Last but not lest, you are forced to play the game in a very small window - not too bad if your monitor's resolution is 640x480, but really annoying if you use 1024x768 like me. If you can ignore or get used to these gripes, though, you will find Captain Quazar a fun and charming little game that you won't mind coming back to again and again. Recommended! 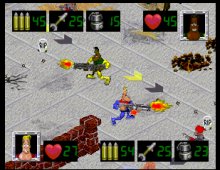