Cavern Fighter is a faithful PC remake of a classic Spectrum ZX game from Bug-Byte, which is one of the best Scramble clones. As Crash magazine elaborates in their review of the Spectrum original, "[Cavern Fighter] is a quite classic version with caves, missiles, city, fuel dumps (for fuel and points), defence installation, asteroids and alien fighters. Once a sector is completed, it means that on loss of life you start at the beginning of the sector. The object of course, is to penetrate as deep as you can into the caverns (of Zragg in this case) and destroy the Dictator's lair (and save Watford - for what?) whilst avoiding the automatic missiles and guardians, and without crashing into the zig-zagging walls and ceiling at a reckless speed.

Criticism: One of the problems with a Scramble type game is the handful of keys required to play it well - so top marks to Bug-Byte for providing user-definable keys. I think this is the most colourful version I have seen for the Spectrum, and certainly one of the most playable. The graphics are good, very fast, large and well detailed and they move very smoothly. The explosions are not what you would call spectacular, but somehow they seem very vicious and realistic. Great sound too. If you haven't got a copy of a Scramble type game, then this would be a good buy. The graphics are smooth and colourful, good sound. I couldn't stop playing - it is extremely addictive!"

Thanks to Ian Munro's efforts, PC gamers now have a chance to play this fun Spectrum game. The action is very faithful to the original, except the graphics has been enhanced with VGA resolution. If you like arcade games or cavefliers in general, check out this great remake that proudly joins the ranks of Jet Set Willy as one of the most authentic remakes of a classic game. Recommended! 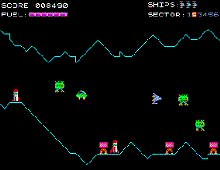