In the crowded arena of Space Invaders clones (there must be hundreds of them floating around the WWW), Cash Invaders stands out from the rest with sheer size and playability. Inspired not only by Space Invaders but also by Psygnosis' Blood Money and other space shooters, Cash Invaders features a staggering amount of levels - 100 in all, plus 10 bonus levels. You shoot aliens to earn money, which you can use at the end of each level to buy power-ups. There is a large arsenal of weaponry, power-ups, and types of aliens, which means the game will sustain your interest for much longer than a typical Space Invaders clone. Smoothly animated ray-traced graphics and nice ship/alien design rounds off this fun game that you will come back now and again for some mindless fun. Highly recommended! 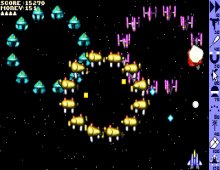