Captain Pork's Revenge is a superior sequel to Captain Pork's World of Violence, itself one of the best Liero clones ever made. In the author's own words, the game features "...many vast improvements over World of Violence, including a better menu interface, a quick-start mode and new graphics, transparency and dynamic light sourcing - now you can hide in areas of darkness, lots of highly configurable gameplay options, split-screen and serial-port null modem multiplayer (+ a new experimental IPX mode), and [finally] reasonably capable AI opponents (bots)." If you like the first game, you will like this sequel even more. The dynamic light sourcing alone is worth the price of admission (free). And if you haven't played the original, check out one of the most underrated and unknown Worms-style games ever made - although I wish the bots were more intelligent. Recommended, especially if you like the original. 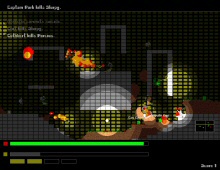