One of the most impressive freeware shooters I played, Another Zero is also one of the most difficult games in the genre, freeware or not. Three ships are selectable, each with different characteristics, a main weapon, and a secondary one with limited energy. The Blue Dragon, piloted by Lihide, is the most balanced between speed and firepower; its secondary weapon is an energy bolt that moves straight, destroying (almost) all the enemy shots on its path. The Yellow Snake, piloted by Fhala, is the speediest. Two invulnerable pods rotate around it and, as a secondary weapon, they can fire the same weapon as the ship, triplicating the firepower for a short time. Unfortunately, due to the rotation they can leave the ship uncovered from enemy fire in the wrong moments. IMO, it's the most difficult to use.Finally, the Red Tiger, piloted by the beast-man Viz: powerful but slow, it can protect itself from enemy shots thanks to a circular flamethrower that ensures protection from all sides.

Once the choice is made, it's time to go into action. Don't think it will be a soft start: after the first waves of enemy ships, you'll meet a mini-boss already, a robotic dragon which, trust me, will make you despair the first times :b Mastering the use of the secondary weapons, made more for defense than for offense, is essential. Remember, even the most insignificant enemy can vomit a huge load of fire aimed at you! Use every pause to avoid shooting and make the secondary weapon recharge faster. Luckily, the ship is always very responsive to the controls, which is very important in a game based on quick reflexes. At first, I thought that nine lives, even replenished at the change of level, plus the frequent extra-life bonus (a big star) given by the bigger enemies, were exaggerate. It doesn't take long to realize that it's a fair amount ^^

Though they take only half of the screen, the graphics can compete with commercial productions. There are many fine details, like the halo that surrounds the ship when you get an extra life, the transparent explosions, and the sparks left by a shot when it hits the target. Similar to some SNES games, enemies slightly pixelate when they're hit.

Sadly, the game has only three levels, a common flaw of many Japanese freeware shooters. However, considering the VERY high difficulty, you won't regret the lack of more levels after a boss will savagely take all your lives in a minute :b Overall, this is the perfect game for the long-time SHMUPS player. Casual players, stay away if you care for your patience! 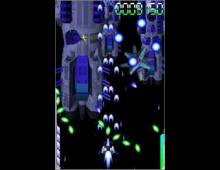 People who downloaded this game have also downloaded:
Amanagi, Amok, Anchor: The Last Hope of the Brilliant Ocean, Arkanoid 2, Ambush in Sector 9