Amok is a solid conversion of an underrated FPS on the SEGA Saturn console that offers several interesting gameplay innovations that were sadly overlooked, the best of which is the blend of strategy elements that fans of 8-bit classics such as Carrier Command will be very glad to hear about.

The plot is nothing special-it is just another variant of the clichť corporations-rule-the-future-world premise, but with a neat twist that explains your role in the game. Basically, two corporations who had been fighting each other for dominance over the world had decided to sign a cease fire agreement. World peace would, naturally, hurt the profits of many weapon sellers and other shady underworld merchants. You play mercenary pilot Gert Staun, who's been hired by the most powerful underworld corporation, The Bureau, to stir things up between these two corporations and, hopefully, get them back to their profitable (for The Bureau) warring ways. You do this by piloting a versatile, all-terrain vehicle called a Slambird (which looks somewhat like a walker from Star Wars, only modified), wreaking havoc in ten Mission Phases in four different environments; barren wastelands, the ocean floor, Loso City, and subterranean tunnels. While the wasteland and ocean floor look remarkably similar (the only real clues that you're underwater are the sharks, enemy Scuba Grunts, and the twin screws your Slambird sprouts for propulsion), they are nonetheless fun to roam around.

Gameplay is deceptively simple: blast everything that moves, collecting power-ups before moving on to the next level. Default control of your Slambird is by the familiar DOOM-defined keystrokes. Strangely, Amok only supports the keyboard-no joystick or mouse allowed. As you trudge through each level, all manner of biomechanical beasties are out to stop you -- Grunts, Missile Tanks, Droids, and minefields, to name a few. They're all relatively slow and stupid (especially the minefields), but there sure are a lot of 'em, and they're very persistent within their defined patrol areas. You can pick up various power-ups that litter around the level to boost firepower and repair the Slambird. True to its console origins, you can't save anytime you want to in the game. Instead, once every couple of missions, you'll receive a password that will allow you to restart the game at one of five midpoints.

Despite its deceptive simplicity, Amok offers a significant strategic challenge as well; the guns- blazing approach will almost guarantee certain death, forcing you to be stealthy and observant to survive long enough for those elusive save passwords. Overall, it's a nice little shooter that doesn't hold up to the best of breed, but it an all-around solid game that is well worth a look. 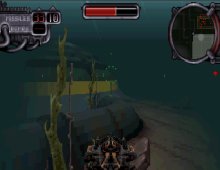