Armour-Geddon is a unique 3D combat sim with a nice strategy twist. Your mission: destroy a heavily defended laser weapon by building a fight force and gathering new technologies until strong enough to stop the laser from destroying Earth. There are various different vehicles you can produce and take control of, directly or by using the autopilot. Not too complicated but still complex enough to be worthwile. Reminiscent of Konami's Killing Cloud and even older Carrier Command in the good blend of action and strategy elements. Recommended for all fans of futuristic sims. 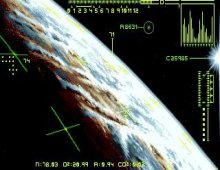