In the depths of space a holocaust has occurred. Intelligent and hostile alien life forms have taken over the Military Research Unit in the Planet Azarin 2E. Featuring over 50 huge levels of Alien blasting with a non-linear game sequence - over 250 ways to complete the game. Also includes dark levels where you can only spot the Aliens by their blue eyes. The sequel to one of the most popular action games of all time. Tower Assault is yet another action game with a lot of shooting and killing. Not much has changed since the first game, so if you liked Alien Breed you'll love this one. Great game for action players. 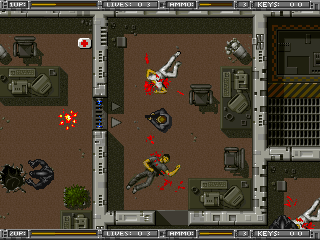