A conversion of one of the Amiga's most popular game titles of all time. Alien breed is a fast paced action game with a lot of shooting, explosions and death. The game takes place on Federation Research Station that has been infested by a massive army of Aliens (they remind me of the Xenomorphs - from the movie Alien). Your job is to terminate them and complete the mission. It's rather easy; just make sure you don't run out of ammo. The game has total of 12 missions and it's definitely enough to keep you busy for some time.

Terminate every alien encountered on your Base (the Federation Research Station). 12 Levels to shoot through :). This game is one of the most popular arcade games of all times. So check it out!! 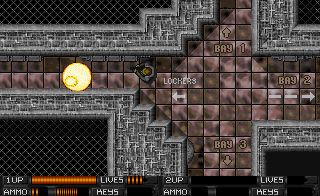