The only PC game based on one of the most popular commercials of all time, The California Raisins is an average, if a bit mindless, platform action game. Before we get to the game, though, a little introduction is in order for anyone who is fortunate enough not to have been bombarded with these commercials when they first appeared in TVs across the U.S. in the mid-1980s-- the California Raisins were brainchild(ren?) of Will Vinton, who created them to promote-- erm-- raisins from California. They first appeared to the public in commercials that were based on Claymation-- a technology that was quite revolutionary for its time. These dancing, singing raisins instantly became popular and were voted "best commercial" in 1987 and 1988. Jumping on the popularity of The California Raisins commercials, merchandise of all kinds was created by Applause Licensing. At the height of their popularity (especially among kids), General Foods packaged PVC figurines of the Raisins as free mail-in prizes; Hardee's restaurant chain used the Raisins as kid's meals' toys... the list goes on, and today Raisins merchandise are all collector's items that are heavily sought after (including this PC game, of course).

Its intriguing pedigree aside, how is California Raisins as a game? Unfortunately, it's your average run-to-the-exit-while-avoiding-baddies platform game. Gameplay will be familiar to all Donkey Kong and Lode Runner fans: help the Raisin climb various ladders and platforms to the exit on each level while avoiding enemies and falling objects. The game takes place inside a cereal factory, so it does make sense that your Raisin would want to escape :) While probably a must-have in terms of collector's value (this is as rare as it gets, folks), California Raisins simply lacks play value to sustain anyone's interest beyond a few levels. 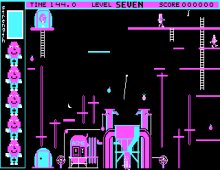