Back to The Future III

Back to The Future III is a fun variety action game based on the hit movie of the same name. What makes the game more than just another shoot-em-up is twofold: the way it presents each chapter in the story as a self-contained, enjoyable action game, and great cutscenes between these chapters.

Those who have played Image Works' earlier Back to The Future II game will immediately recognize the design: each level is a self-contained mini-game. Since all levels are inspired by famous scenes from the movie, those who have seen it will know what to expect. In this final episode to the trilogy, Marty McFly and Doc Brown travel back to 1885 Hill Valley to find people from Marty's time (1985) and return them safely home. But Buford 'Mad Dog' Tannen isn't going to make it easy... not in this Wild West. You, as Marty McFly, will need to survive a buckboard chase, excel at a shooting gallery, dodge the pie throwers, and survive a harrowing train chase. Although the game is disappointingly short, it is great fun while it lasts-- all four mini-games are well done, and you can even practice the shooting gallery and pie throwing (my favorite) from the game's main menu. Buford's mean gang always shows up to spoil the fun, provided an added challenge in each chapter. Cut-scenes from the movies (although drawn in cartoon style) help move the story along, and are much better produced than Back to The Future II

Overall, Back to The Future III is a great action game that all fans of the movie will enjoy. It offers many twists and unique gameplay that are highly entertaining. 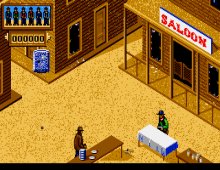 Back to The Future III screenshot

People who downloaded this game have also downloaded:
Back to The Future II, Aladdin, Batman Forever, Simpsons, The, Bill & Ted's Excellent Adventure