This is a platform game based on the hit movie of the same name. Batman Forever uses Acclaim's Mortal Kombat engine, which started to show its age in 1996 but is still capable of delivering fluid, nonstop action. The game follows the movie's plot quite closely, so as Batman you will run into familiar foes such as The Joker and Two-Face. Repetitive enemies and very easy bosses make this an only average game, although it is arguably better than more-hyped Batman Forever: The Arcade Game, which was also published by Acclaim but developed by OCEAN. The ability to change your weapons in mid-game is a nice touch, as well as fun appearances of Robin and Catwoman. Play this only if you're a Batman fan, or really like the Mortal Kombat engine. 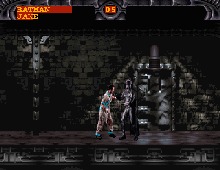