Among game developers, Acclaim has one of the most mixed records of all, curiously displaying a very large gap in quality between their classics such as Mortal Kombat games and the better-forgotten games based on the Batman. Apparently not having learned their lesson from the disaster that was Batman Forever, Acclaim gave us an even more mediocre game with Batman Forever: The Arcade Game. GameSpot says it all about how thoroughly average it is:

"Holy mediocrity, Batman! Acclaim's new Batman Forever: The Arcade Game represents the latest in a long series of ho-hum movie licenses from the Acclaim/Iguana duo. Although certainly better than many of their past efforts, this title's uninspired gameplay and uneven presentation fail to capture any of the excitement found in the film.

Featuring gameplay inspired by such classic arcade titles as Streets of Rage, Final Fight, and the original Street Fighter, Batman Forever attempts to inject a little graphic panache into a tried and true concept. For those unfamiliar with the above titles, gameplay consists of beating up countless henchmen as you travel from left to right (imagine standing in a line at the bank while it is being robbed). Once you have completed the trek, you must face one or more "Super Villains" in order to progress to the next round. Ultimately, you must fight the Riddler himself in order to save Gotham from his evil schemes.

Acclaim has never been shy when it comes to boasting of their state-of-the-art motion-capture studios just outside New York City. With these facilities available, one would expect smooth, realistic character animation to be the highlight of the game. Sadly, this is not the case. In stark contrast to the smoothly animated neo-gothic backgrounds, the motion-captured characters appear to have only a handful of frames per move. As a result, Batman and Robin stutter about on screen as if lifted from a cheap stop-motion film. This problem is exacerbated by the gameplay's hectic pace. With several onscreen henchmen jumping in and out of the screen at any given time, the erratic movement makes it almost impossible to follow the onscreen antics, much less control them.

Although Acclaim has implemented a rudimentary combo system, it's hard to find time for strategy when you're fighting off six henchman. As a result, gameplay often boils down to simply executing a single move over and over again at a lightning pace until you are the last person standing. In fact, I strongly suspect that it is possible to score highly on some levels without ever looking at the screen." 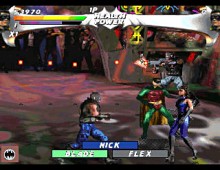