Batman: The Caped Crusader is the second of 3 games from OCEAN featuring the hooded hero (after 3D and before The Movie), with 2 separate scenarios and the action laid out in comic-strip panels. As either the hero or his nemisis The Joker, you're either trying to save the world or dominate it. Whichever side you choose, gameplay involves going around Gotham City, fighting the endless throng of henchmen while solving simple puzzles (e.g. find a way to light the room) that often have clues in the caption. Definitely the best of the lot-- Batman fans will have a lot to enjoy in this game.

In this adventure game you can start to adventures. 1st is the rescue of Robin, who has been kidnapped by The Joker. The second adventure you can play is against The Penguin. His eager is to take over the world.

In this game you walk around several screens (like a comic-book) and you can pick up tools and stuff along the way. 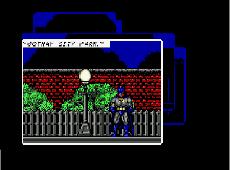 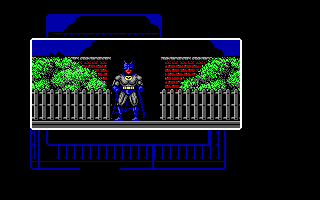 People who downloaded this game have also downloaded:
Batman: The Movie, Amazing Spider-Man, The, Batman Forever, Back to The Future III, X-Men 2: The Fall of the Mutants