Spider-Man's identity has been revealed as being Peter Parker and his arch nemesis Mysterio decides to take advantage of it. The evil Mysterio has kidnapped Mary Jane and taken her back to his turf. You take on the role of Spider-Man in an attempt to rescue her from Mysterio, and by using your web skills and super human powers you start on your journey.. time is ticking, so you'd best be on your way!

Well, I use to have my doubts when it comes to games with comic-superheroes. Programmers tend to rely too much on the name selling the product than the game itself. Anyway - this one is quite good. You are playing Spider-Man - who else - and are armed with your net that is able to freeze your opponent as well you can use it as a rope. You can climb walls and that is not only very useful - I also love our little hero crawling upwards down - looks cool :)

The basic concept of the game requires you to use some switches to open doors - those switches are mostly obvious, while their use might not be visible all the time. Sometimes you regret using a switch that for example closes a trapdoor so that evil mummy can come up to you and hurt you. Not bad overall, really.

A fun platform game featuring Spider-Man, this game makes good use of his unique superpowers: you can climb walls, throw spider bombs, and shoot grappling hooks. Enemies are numerous but dumb, as you can just wait near edges to take them out from long range. Still, the game does give a good feel for Spidey and his webby powers. :)

The legendary Spiderman simply had to have his own game! Of course, this is not the only one but it is, or at least WAS, the best known for some time. It is an average platform/action game with many rooms to be visited and some rather small characters. Spiderman, of course, can climb walls and walk on ceilings which makes his movement much easier than in any other game. What is the goal? I admit I do not know... 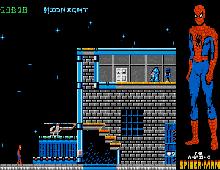 People who downloaded this game have also downloaded:
Aladdin, Batman: The Caped Crusader, Spiderman, Back to The Future III, Alley Cat