"So Icy Tower has got a Japanese cousin", I first thought. But, after playing some more times, I can say that, while the basic concept is the same, the two games are very different. In Bunguru WA, you are sort of a little triton, who must jump his way to the top. Yes, the game is not endless, but has a goal, a golden bonus item, and you must reach it in a limited time. After the first jump, the character can do another one or two in air; then, he has to stand still for a little time to recharge the jumping energy. Problem is, most of the blocks start to collapse as you touch them, so you are required to use both reflexes and some careful planning of your moves.

The layout of the blocks is always the same, but depending on the difficulty levels you are more likely to find the dreaded red blocks, which collapse at light speed once you land on them. True, the game is limited and can get repetitive, but before this happens, you will be hooked by the "one-more-try" syndrome. Fun! 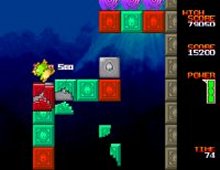