Another excellent game from freeware developer Yamada No Ana Project, who is dedicated to producing games based around the same cast of characters, led by Doka-chan, a stubby construction worker and his friends. Like all other games from this group, the game is 100% English, boasts excellent music, offers 2-player hotseat mode, and allows you to change control keys from the Options screen.

Building Panic is a unique combination of Othello board game and action. You control Yamada, a construction worker who is tasked with covering windows in a building with blue wallpaper. The building has 32 windows in total: 4 rows of 8 windows each. There are competing construction workers who roam the building, covering windows with orange wallpaper. Once all the windows have been covered, you will "win" the level and go to the next one if you manage to cover more windows than the other guys (i.e. there are more windows with blue wallpaper than with orange one)

The similarity with Othello board game lies in the fact that you can "convert" orange-covered windows into blue ones (your color) by surrounding them with 2 blue-covered windows: one on each end of the orange-covered windows. As in the board game, you can do this from any direction: horizontal, vertical, and diagonal. Of course, your opponents will be doing the same thing, so it's imperative that you are faster than they are, and plan your moves strategically.

The action element in the game is no less fun. You will lose health (number of hearts at the top of the screen) if you run into any other construction worker. You can get rid of these guys either by shooting them horizontally, or bump your head at the ceiling (to shake these guys) when they are standing directly above you. There are many power-ups you can use, ranging from hammers (make your shots more powerful), boots (make you faster), gloves (allow you to cover each window with one move - normally you can only cover 1/3 of the window at a time), and many more. Needless to say, higher levels include more opponents (who are also more difficult to kill) and up the ante in different ways (for example, a level may start with half of the windows already covered in orange). The combination of strategy, action, and puzzle elements is very well-concocted. You will constantly have to be on your toes, plan your moves, and adjust your tactic according to what the other guys do.

The only game by Ryuuto Yamada so far to have been published as a boxed shareware title in Japan (see box shot above), Building Panic is an addictive, original, and well-designed game that will keep you occupied for hours on end, whether or not you're a fan of reflex-based puzzle games, Othello the board game, or just action games in general. 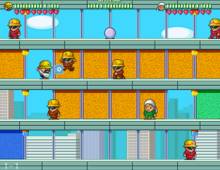