Bonkheads is a fun 2D action game designed for kids. The Troll brothers Grag and Thog must rid their home of annoying pests in each of the 144 levels that comprised Trollsville. You can play solo as Grag, or have a partner join the game as Thog to work together to save the town. You have to be careful, though, as giant bosses Shrew-Man-Chew, T. Wrecks, and D. Evil will do everything to stop you.

Although you play a big Troll, you can't beat your enemies to a pulp in this game (contrary to conventional wisdom about Trolls). Instead, you knock them out by 'bonking' them from below, then kick them away quickly before they wake up. If you wait too long and they wake up, they become more aggressive. And if they make it to the bottom of the screen, they 'warp' back from the top with an even faster speed. Dogs, raccoons, bees, and many more animals will charge at you from all cardinal directions, the action is fast and furious most of the time. Fortunately, you also can 'warp' (similar to Pac-Man) from left to right as you reach the edge of the screen, and there is plenty of power-ups to make your job easier. These include cases of TNT, cash (used to buy more stuff), speed-ups, and more. Trollsville's wisest elder Huntho is also ready to lend a hand, or at least a tip or two, when the going gets tough. The furious action is enhanced by colorful, detailed SVGA graphics that are smoothly animated. There is a number of settings you can change, including the difficulty level (easy, medium or hard). Although the game is not very difficult at first, the action gets more intense the more you play, so watching a demo is a good way to learn the basics.

Although the solo game is already a lot of fun, Bonkheads really shines in two-player mode. You can play either co-operative or competitive mode, and they are both a blast. With a lot of levels, many different enemies, and an all-around solid gameplay, Bonkheads is a keeper. Highly recommended, especially for budding action gamers in your house. 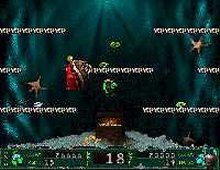