BZFlag is a great freeware multiplayer 3D tank battle game that has one of the best "Capture the Flag" gameplay I have seen. The game was first developed in 1992 by Chris Schoeneman, a then-college student at Cornell University, for Silicon Graphics (SGI) machines. The game is now an active open-source project maintained by Tim Riker, with many enthusiastic fans and developers who keep improving the codes and adding new features.

If you like multiplayer action games, BZFlag is your dream come true. Although your goal in the game is to blast the enemy tanks (with the help of your teammates) into smitereens, BZFlag is all about flags as the name implies. There are numerous kinds of flags. Some flags are essentially weapon enhancements: guided missiles, rapid fire, machine gun, laser, and invisible bullet to name a few. Some flags are power-ups: for example, jumping lets your tank jump, ricochet (my favorite flag) lets your bullets bounce off of buildings and walls, stealth makes your tank invisible on radar, and many more. There are also "bad flags" that you should avoid at all costs, including: colorblindness (a fun flag) makes you unable to identify color of other tanks (and hence tell friend from foe), jamming makes your radar useless, obesity makes your tank very large, etc. You can only carry one flag at a time, so you will have to drop your current flag first before you can have another. Other than contending with enemy tanks, you also have to keep an eye on the "rogues," independant tanks that are trying to take everyone out. The game supports capture-the-flag, free-for-all, and many other gameplay modes. The most recent version supports OpenGL, making the 3D graphics look better than ever before. If you enjoy multiplayer games, BZFlag is simply a must-have. Besides being a great game, the open-source status, intuitive map editor, and a very active community of map designers and programmers ensure that BZFlag will always have something new to draw you back.

Note: The version for download here is for Windows 95/98. 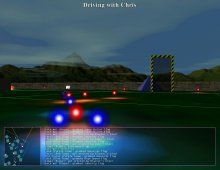