Barrel Patrol 3D is a fun fanmade remake of Ripoff, a late 1970s Vectrex game in which you must defend your stash of fuel cells from invading pirates. In Barrel Patrol 3D, you must protect your barrels from enemy tanks by shooting them, running into them, or getting them to shoot each other.

The game takes place inside a circular arena inside a forcefield. Enemy tanks gradually appear and move towards your stash, trying to carry the barrels away. Once in a while, power-ups appear for a few seconds; you can collect them to improve your tank's weapons, such as faster missiles, allowing your shots to rebound off the forcefield (my favorite), or turning your shots into homing missiles. A nice touch is that these power-ups work for all tanks, including your enemies, so you must prevent them from collecting those while you're keeping an eye on your tanks. The effects of add-ons are cumulative, so once you accumulate a few of the same time, your tank becomes well-nigh invincible. After all enemies have been destroyed, you proceed to the next level, and you get points for all the barrels remaining inside the arena. Once all of your barrels have been taken away, it's game over. Although you have unlimited lives, it's not a good idea to get shot at so often, because you lose all the power-ups you collected, and if your tank explodes after heavy damage, your new tank is "frozen" for a few seconds - which gives enemy tanks plenty of time to carry away your barrels.

The game is very easy to play, with a few simple controls. There are several levels, each with a fixed number and locations of barrels and enemies. The game becomes increasingly more difficult with each new level: enemy tanks aim better, and there are more of them. The game screen includes all the info you need, including your score, the number of remaining barrels, a radar screen, and a damage indicator.

Although it would already be a great game without dazzling graphics, Barrel Patrol 3D does look very good. The game takes advantage of openGL and 3D accelerators: tanks and barrels are fully textured in 3D, and the shimmering light of the forcefield is very pretty. It's too bad that the game was never really fully finished - last version is 0.90 that dates from September, 2001. So there are some missing elements, including game music (although sound effects are present), and the game may be incompatible with some graphics cards. Still, with a great combination of gameplay and graphics, Barrel Patrol 3D is one of the best freeware action games that's great for a few minutes of coffee break fun. 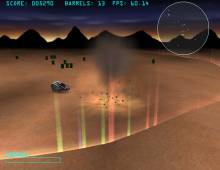