One of the most obscure and underrated cyberpunk shooters ever made, B-Hunter is a low-profile release developed by Danish-based Interactive Vision and published by UK-based Midas Interactive Entertainment. Similar to Psygnosis' much better known G-Police, you are a futuristic bounty hunters who flies around in a hovercraft in a huge metropolis, attempting to arrest criminals and corrupt cops from on high. The mood is true to the game?s cyberpunk premise, with a lot of neon lights, techno soundtrack, and Blade Runner- style vehicles.

Although gameplay and premise are similar to G-Police, B-Hunter is actually a more non-linear game due to the fact that you are a bounty hunter, not a cop. This means that you are free to pursue whatever profit-making venues appeal to you at any time, and your enemies also include other bounty hunters who are after the same booty. Although your main goal is to collect as much money as you can, you have to be careful because if you shoot the wrong vehicles, you will be fined. If your fines exceed 50,000 units, then you are outlawed, and a bounty is placed on your head. You can either pick up small change by apprehending petty thieves labeled as "suspects," or you can go for the big fish. Regardless of your strategy, the hunt is not easy because of the rapid speed at which you and potential targets are traveling. One of the best things about B-Hunter is that, similar to G-Police, the city is alive, and you will not suffer from boring lulls while travelling to your destination. A lot of action and potential booty are always buzzing around you, keeping you on your toes and giving you opportunities to collect money, ammo, or get your ship repaired.

The gameworld is surprisingly large for its small size (less than 70MB full on the CD, and much larger than limited action zones in G-Police)?probably due to excellent graphics compression techniques. However, it is worth noting that, while adequate, the graphics are nowhere near the amazing visuals of G-Police. You have access to ten unique weapons, each with five different variations. These include ion gun, lead buster chain gun, magnetic plasma, nitro crackers, stun ray, heat-guided missile, sonic blast, TNT mine, and rocket-mounted demolition bomb. Unfortunately, you may only carry two different firearms at any one time because your hovercraft is only equipped with two slots. As in G-Police, the weapons can destroy other vehicles but have no effect on stationary structures. You carry a shield to deflect damage, as well as a radar to identify pathways, criminal suspects, power-ups, other bounty hunters, and mission targets. There are over 40 missions with diverse objectives, including dogfights, search-and-destroy, and gang fights. The action takes place in different areas throughout a huge metropolis that are connected by a complex tunnel system. Despite the radar, it is quite easy to get lost due to the narrow streets and limited visibility.

Although you can use the tunnels to go anywhere you want, the game is linear in a sense that you cannot access certain missions until you complete the early ones. If you prefer multiplayer, the game offers network support for up to eight players over a LAN or the Internet. If you like cyberpunk action games and enjoy the likes of G-Police, B-Hunter is well worth a look. Don?t be put off by primitive graphics by G-Police standards or its small physical size: B-Hunter is a wonderfully massive and atmospheric game that will keep you hooked for a while. 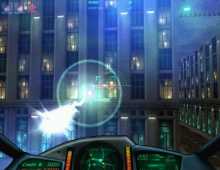