Battle Arena Toshinden 2 is a game similar to games like Virtua Fighter and Mortal Kombat. You start the game by selecting between 8 different fighters where you choose one and the computer will then select one randomly that you will have to fight against. Note that you can also choose the bad guy from the first Battle Arena Toshinden.

Each character is equipped with a special weapon and each weapon has it strengths and weaknesses. In the end you won't notice and huge differences between them although I did end up with favouring a few characters because of both their look and their weapon. The game screen is quite well done with excellent 3D graphics and good character animation and movements. There are several different combat formations but sadly only few of them are effective which also means that you will end up using these all the time as you finds out that those are all it takes to beat the computer.

You also get the option to play in two player mode which adds additional entertainment to the game as this feature usually does and even network play. Battle Arena Toshinden 2 doesn't reach a game like Virtua Fighter though as the game doesn't offer the same challenges and you feel the game is a bit basic at certain areas as well. The major difference between this game and the first one in the series is the new well done graphics and the fact that the game is running via Windows and not Dos that should help with playing it on new computers. A recommended choice for the fighting game player though but not much more than that.

Battle Arena: Toshinden 2 features graphics, sound, music, and action that makes its predecessor seem ancient! With updated moves and defense, the original cast launches back into battle! Newcomers join the fight as well. Gaia, the boss from the previous game, is now selectable. The camera angles in this game give a realistic feel to the gameplay. The only drawback is that the controls are terrible and unable to be configured. 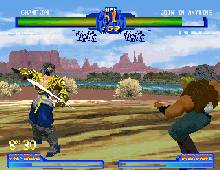 People who downloaded this game have also downloaded:
Battle Arena Toshinden, Blood 2: The Chosen, House of the Dead 2, The