The Bugs Bunny Hare-brained Adventure is another good adaptation of a cartoon license released by Hi-Tech Expressions. Based on a TV episode of Bugs Bunny, you play the famous hare who must find his way out from the mad scientist's tower.

The game is played from an isometric perspective, with crisp graphics that utilize 4-color CGA palette to full advantage. The gameplay involves running from one room in this maze-like tower to the next, avoiding menacing creatures who are sent after you. Since you cannot attack at all, the only way to even up the playing field is to collect various potions that are scattered around the tower. These potions are power-ups that can either harm enemies, or help you in other ways - turning you invisible, for example. If you love the TV series, you'll enjoy this fun game that preserves its gentle sense of humor while offering a solid arcade-style gameplay. Recommended. 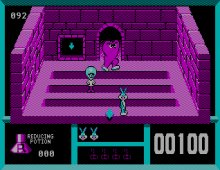 People who downloaded this game have also downloaded:
Amazing Spider-Man, The, Galaxian