Bombjack is an excellent fanmade conversion of Tecmo's classic arcade game of the same name. The game is much better than Mighty Bombjack, the official PC conversion made by Elite Systems in 1990. If you are unfamiliar with either games, here is the skinny: you play Bombjack, a caped superhero who must defuse bombs in various cities around the world. There are five different locations, each containing a backdrop depicting a famous landmark. Each screen contains 24 bombs you must defuse by collecting them - much like what Pac-Man does in his world. You can leap into the air and run left and right, or use the "turbo leap" option for an extra boost. As soon as you collect the first bomb on the screen, a fuse will burst into life on another bomb, putting it in "active" state. The more active bombs you manage to collect in a row, the more bonus points you will get. Once you collect all the bombs on screen, you will immediately go to the next one.

Although Bombjack looks like a simple arcade game, there are many details that make the game much more interesting and addictive. While you are busy collecting bombs, you must watch out for the various nasties that can instantly kill you by touch. But again like in Pac-Man, you can collect a special power-up (a "P" disk that would randomly appear) to turn all the baddies into smiling faces you can collect.

While Elite Systems' decent Mighty Bombjack suffers from awkward controls and not-so-great graphics, this fanmade effort shines with excellent graphics that look remarkably like the original (although sprites are created, not "ripped" from the arcade version) and plays much smoother as well. Bombjack even has a built-in hardware timer control, so it plays at the right speed even on modern Pentiums. If you like Tecmo's original or games like Bomberman, you should check out this little-known fanmade game. Highly recommended! 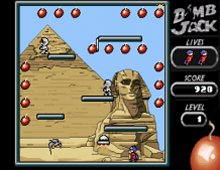