Bumby's Arcade Fantasy is a mediocre action-puzzle game. Easy game principle, the typical "steer a jumping ball through obstacle-filled rooms while collecting stuff" game with some nice twists. Very easy at first, gets more difficult and complicated in later levels. While the concept is interesting at first (for anyone who's never played Marble Madness, that is), the novelty quickly wears out from repetitive gameplay, boring level design, and in general just not enough surprises to keep things interesting. Fun for a short while, not much more. 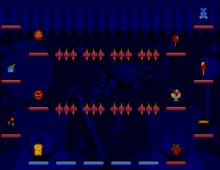