After a huge success of Mortal Kombat games, a lot of companies begun making their own fighting models. Gametek came up with a rather original game featuring martial arts animals and did a good job. Most of Brutal games were made for consoles, but one was also released for PC. This is that game.

You have to select one of the offered fighters, then beat the others in order to... win something I guess. All the characters are nicely drawn and have names such as Foxy Roxy, Kung Fu Bunny or Psycho Kitten. Each character has 6 different kicks plus a few combos and special attacks. Brutal is not a hard game, but it's definitely not the easiest one as well!

The graphics are nice, cartoon looking and the sound is pretty nice. Two player mode is quite fun and strongly recommended! Have fun with those kung fu animals!

One of the more successful Mortal Kombat-inspired fighting games, Brutal: Paws of Fury is an innovative game that features cartoon animals doing kungfu moves. With names like Foxy Roxy, Kung Fu Bunny, and Psycho Kitten, the game has a great sense of humor that fans of Earthworm Jim will enjoy.

Each character that you can control (12 in all) has 6 different attacks, not to mention several combos and special attacks. The graphics are excellent, and the animals are large and very well animated. Compared to the console versions (e.g. for Super Nintendo and SEGA Genesis), this PC port is inferior due to the disappointing lack of kungfu "belt system" (i.e. advancement in rank) and the great CD soundtrack and fun video cutscenes/clips present in the SEGA CD version. Still, this is a fun, innovative, and immensely playable game that remains a lot of fun many years later. For the "definitive" version, though, you should hunt for the SEGA CD version instead. If you like the game, be sure to also check out Brutal: Paws of Fury Remix, an excellent fanmade remake/update on this site. 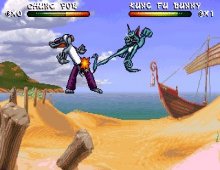