Another SEGA arcade conversion done by Unlimited Software. Altered Beast is a typical arcade side-scrolling beat'em up game. You all know it anyway. The conversion doesn't look too good graphically but plays fairly well. Just don't compare it with the original...

The game plays a bit like Quicksilver's Karnov in design and execution, in which the sprites all have their own colours. The game is quite satisfying as beat-'em-ups go, and my only real criticisms are a) if anything the levels are too short, b) the players look like they're doing ballet kicks rather than karate, and c) with the background and 400 bits of zombie flying around it's hard to see what's going on. But Altered Beast, like its arcade original, pushes the PC to its limits, and although it's a flawed execution in some ways, I'd still say it's a good game. 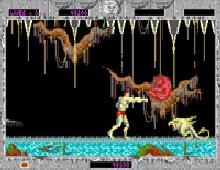 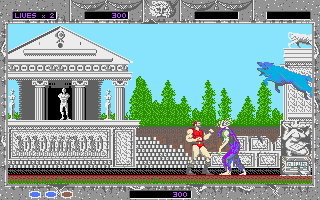