One of the worst games from Psygnosis, Bram Stoker's Dracula is a lackluster first-person shooter with minimal adventure elements. The plot: legions of the undead are rising from their graves, and it's your job to put a stop to the madness. To do this, you must purify the many creature-spawning graves on Dracula's estate while fending off the horrendous monsters along the way. Having Psygnosis' name on the box can't rescue Dracula from the soporific gameplay - rooms in the estate begin to resemble one another after a while, and puzzles are not only simplistic and boring (find key X to unlock door Y), but are also few and far between. The graphics are also not up to Psygnosis' usual standard: very drab palette throughout with some several pixellation and many "clipping" problems. Overall, a disappointing game that is so tedious it's hard to believe it comes from the same house that produced many platformer gems such as Shadows of the Beast for the Amiga. Avoid this Real Dog at all costs - don't say I didn't warn you. 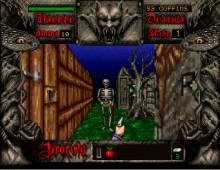