Block Buster! is a decent Breakout clone from Mindscape. Nothing much to say about this one, except that it introduces an interesting way of giving you bonus items: as a menu on the right hand side of the playing screen. This lets you choose bonus items as opposed to just waiting for a random one to show up.

Unfortunately, despite an interesting bonus menu and crisp EGA graphics, where it matters most - that is, the actual gameplay - Block Buster! pales besides Arkanoid and other classic Breakout games of the same period. There are simply too few bonus items, and the level designs are too boring or mundane to hold anyone's interest for long. Recommended only for die-hard Breakout fans who can't get enough paddle action. Otherwise, ignore this average game and check out many better games in this subgenre on this site instead. 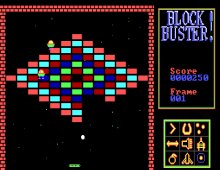