Ball Race is a unique racing game from Carl McLawhorn, most famous for his multiplayer Trek game in the early 1980s. The game basically lets you race a ball (which looks like a billiard ball) against the computer or another human player. The game is played from a top-down perspective that shows the race track and vital statistics such as the level of energy you have, the number of laps you have run, whether or not your shields are up, and more.

To make things interesting, there are up to 50 other balls that are not part of the race, that you must avoid or hit in some cases during the game. The effect of bumping into one of these balls is akin to knocking two billiard balls together, and ball physics is reasonably modelled in the game. There is a few power-ups you can collect during a race, my favorite one being "Alice's Mushroom" which shrinks your ball (err, the one in the game, of course ;)) for a short period of time. Shields will allow you to explode all normal balls, but drain your energy. You can also drop mines once you collect them. There is a number of other useful options that aren't commonly seen even in typical racing games, including the ability to set a cruise speed, as well as varying dificulty levels (which determines how fast you can accelerate and how responsive your left-right motion will be).

With a unique premise and solid execution, including reasonably realistic ball physics, Ball Race is one of the best early freeware games that were popular among BBS'ers. 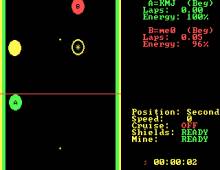