The gameplay is will be familiar to anyone who has played Sierra's classic arcade game. You are not a frog here, though, but a cool beach guy who's trying to cross the streets, the beach, and finally the bustling sea lanes to get to the floating bar, where pretty girls await. The game is controlled only by arrow keys, and it's as simple as it gets. You have to avoid cars, trucks, skaters, surfers, and various other kinds of traffic. You can pick up pots of gold to increase your score along the way, and the game has a few nice touches that make the basic gameplay more challenging. For example, rafts you can step on in the last screen before you get to the pub will disintegrate in a few seconds, and each new level increases the number of people you must bring to the other side (they "tag" to each other, forming a line). With a rocking soundtrack, sharp graphics, and a tried-and-true gameplay, this incarnation of Frogger is a great way to waste a few minutes at work, or relax after a complicated game. 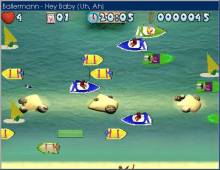 People who downloaded this game have also downloaded:
Bananarama, Arkanoid 2, Back to The Future III, Baby Jo in Going Home, Ball Blazing Fantasy