Baby Jo is a quite fun jump'n run game by Loriciel - a bit similar to SEGA's classic Wonderboy. You are baby Jo, a baby (in diapers, no less) who has to struggle through many levels to find his way home. Being a baby, you don't naturally have 100-ton bazooka to blast enemies with, but you do have natural weapons that are quite hilarious (I'll keep them a secret for now-- just try the game ;)). Overall, Baby Jo isn't truly original, but like all Loriciel game, breaks the mold of typical platform game. Definitely worth a look, but don't hold your breath for something revolutionary.

This game is damn cute. It has the white fluffy cloud screen, with the bottle (a.k.a health), diapers, hearts and the face of Baby Jo. This is your basic platform game. You go from left to right, avoiding and killing the enemies. When you get to the end, you've completed the level. Its not that hard to figure out ;) It's got a lot of charm, but nothing unusual. Flowers try shoving stuff up your arse, wood rolls around, and bees and other flying things try to smash you in the face. Did someone mention a lawnmower?

I've never played this game with any sound, but I did some inquiring into the game to find out more about the sound, to discover that it actually doesn't have any sound. That's a bit of a let down, but its still a great game nonetheless. If they ever remade this, could you imagine the kind of sounds it would have? ;)

The graphics are actually really good, and that adds to the whole appeal of the game. If you've played about a billion other side-scrolling games such as this, you might not find anything new or exiting here. But the theme behind it is totally original. 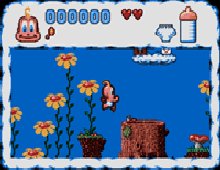 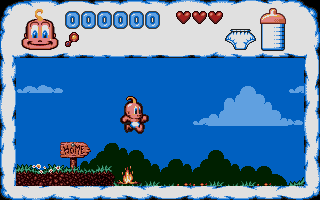 People who downloaded this game have also downloaded:
Amazing Spider-Man, The, Back to The Future III, Alley Cat, Aladdin, Assault Dragon (a.k.a. Day 5, The)