Dragon Force, Icarus, and Assault Dragon are three competent 2D side-scrolling shooters from Korea, based on the same mundane sci-fi plot about defending the Earth from alien invaders. All three games offer no-nonsense shooter gameplay, with elaborate background graphics, nice enemy ship designs that recall Macross and similar Japanese manga series, and a rocking soundtrack. The games are not very difficult, but the nice variety of levels and enemy ships make for a few hours of relaxing fun. Some of the best games from Korea, even if they are by no means classics of the genre. The last game in the series, Assault Dragon, is especially worth a look because of excellent ship designs and innovative "scrolling" backgrounds that are very nice - although confusing to look at ;) 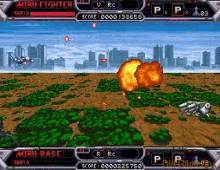 Assault Dragon (a.k.a. Day 5, The) screenshot