Ojamajo and AVS (formerly called Kakutuku) are two excellent 2D fighting games coded by ASCII's Fighter Maker application. The games feature a good number of characters and moves, very fluid animations, and a well-balanced gameplay that is neither too easy, nor too difficult as to frustrate most people.

Since both games were made with Fighter Maker, they share the same controls and a similar interface. They also feature many well-known characters from existing anime/manga series in Japan. AVS is the better of the two games due to its better graphics, greater variety of moves and special attacks, and more challenging computer opponents that can defend themselves as well as attack. If you enjoy one-on-one fighting games, both games rank as some of the best releases from the freeware community. Recommended! 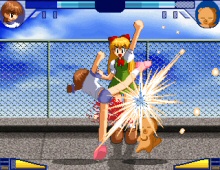