Assault Rigs is a fun 3D tank game that combines the best elements of Battlezone and - yes - Pac-Man. In this fun action game, futuristic tanks duke it out in a furious deathmatch, gathering up as many gems as they can while navigating the maze-like arena.

You can choose between three tanks to drive, each with its own strengths and weaknesses. One tank is heavily armored but slow, one is fast but weak, and one that offers a balance between armor and speed. Although the tanks look similar to real-life tanks, Assault Rigs' focus on arcade gameplay makes no concession to realism: tanks can bounce off walls with no damage, and they move much faster than any real tank. One nice touch of realism is that it takes a while to get the right side up again if you flip over - during which your opponents will have plenty of time to shoot you as much as they can.

Similar to most other multiplayer shooting games, there is a number of power-ups scattered around the level, here in the form of glowing cubes. You shoot the cubes to uncover extra armor, faster guns, and various weapon power-ups including both conventional ones like the heat- seeking missiles and bouncing bullets (a nod to Atari's classic Combat), and innovative weapons such as the computer virus you can shoot to inflict bio-mechanical diseases on enemy tanks. In all, there are twenty different power-ups, thus giving it a much greater variety than most other games of this type.

The graphics, as one can expect from a Psygnosis title, is excellent. With a lot of neon lights and psychedelic tanks, objects, and walls, the game recalls the light cycle scene in classic movie Tron. You can also view the carnage from five different camera perspectives, and watch your tank's turret morph into a different nozzle every time you collect a different weapon power-up. Another interesting feature is that as you advance in levels, the game's graphics style will begin to 'morph' from a fantasy/cyberpunk style to more 'realistic' style, by adding texture maps and shading to tanks and other objects. Perhaps a metaphor for art becoming reality? Well, you decide ;)

While the game can be played solo or in two player split-screen mode, the real fun is network play where up to eight players can play simultaneously. If you like Atari's Combat or Battlezone, you will definitely enjoy this fun old game that was much better known on the Playstation console. 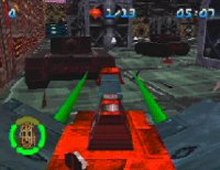