Assassin 2015 is an entertaining 3D action/adventure hybrid that is unfortunately far too short and easy. The description from MobyGames follows:

"You are Jack Butcher, a former soldier, and now an assassin working for the government. Your contact Sabre has your new assignment: take out Jaques Arnoud, head of Microkomm, and also an associate of the Red Storm Rebellion. They are planning to use Microkomm's new government contract to fund a rebellion. The government wants him dead. This should have been an easy assignment - hit and run. All you were supposed to do was escape too the roof. But something's not right. Seconds after you shot Arnoud, a guard bursts through the door. After narrowly avoiding capture by the guard, a bomb blows the stairways to the roof. Someone's playing games. And now you're stuck in a building crawling with guards and security drones. All of them are out to get you.

Assassin 2015 mechanics are like your basic 3D shooter, run around and shoot guards and drones. The difference is that Assassin 2015 is very much plot-oriented. Everyone is after you, so you don't have the time to go exploring rooms and opening doors. Opening the wrong door or going the wrong way will usually in your death, as you will encounter a horde of guards or drones. You are escaping the building, not attacking it. So in Assassin 2015, you listen to the instructions of Jett Jones, your only outside support, and do exactly what she says. This makes the game-play is very linear, going from corridor to corridor and from room to room, sometimes shooting or running away from guards. However the game features some other scenes to break the mold, such running away from a giant robot, and an elevator shoot out."

The game is really a no-brainer - just point and shoot in most sequences - although it is diverse enough to keep you interested. It's definitely better than Creature Shock, but not as challenging or as long as Cyberia games. Overall, if you enjoy eclectic FPS that isn't a straightforward action game, Assassin 2015 is worth a look. It could have been a Top Dog had it been more challenging and long - a pity. 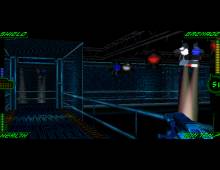