Alien Odyssey is a fun but little-known multi-type action game by Argonaut Software that is similar to Cyberia in concept: it's got action, flight sim, adventure, and Full Motion Video (FMV) sequences all rolled into one entertaining CD. The game casts you as Psaph Abal, a member of a future race whose craft is stranded upon a distant planet. As you emerge from the wreck, you encounter a strange alien being chased by some evil-looking robots. Sensing that the robots are the bad guys, you hop on a speed bike and begin blasting the robots with your laser pistol, while chasing the alien to rescue him....

The bike chase through the forest is a lot of fun, although it's a "rail shooter" sequence (think Rebel Assault) that restricts your movement to merely moving crosshairs and firing on the baddies. However, the great graphics and good variety make this a fun part: the path you take is never the same, and there are countless movie clips to discover. Too bad the subsequent sections of the game aren't as well-made, although they are still interesting enough to hold my interest. The 3D portion of the game includes adventure-style puzzle-solving, interspersed with real-time combat sequences to keep things exciting, and the driving portion toward the end reminds me of Descent minus 360-degree freedom of movement.

Overall, I had a lot of fun with Alien Odyssey, even if it's cheesy and cliche and far too easy. The FMVs are fun to watch, and there's enough variety to keep you occupied, although it's ultimately too linear (like Cyberia) to warrant extensive replay. Well worth a look if you enjoy diverse action games! 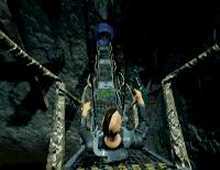