Ball Blazing Fantasy is a fun arcade-ish game that plays like a cross between Marble Madness and Dizzy series of games. The game contains two different ball-rolling games: "Ball Blaze" and "The Quest." In "Ball Blaze," your goal as a ball is to hit a stationary ball into your opponent's goal. Practice mode lets you practice your shots against computer-controlled opponent or another human player. Unfortunately you can't play against human players in the Tournament mode, but at least the AI is decent enough to put up a good fight. As in Marble Madness, you'll need to bounce around a lot, be it off the enemy balls, walls, or the neutral ball you are hitting. This mode is a tad too short, but that is not necessarily a bad thing, since you will be spending a lot more time with "The Quest," the highlight of the game.

In "The Quest," your objective is to collect a given amount of minerals to go on to the next level. As usual, you have a limited number of lives, which you can lose by getting killed by enemies or falling off various clifffs. This part of the game is a lot of fun, although it is very difficult. The game is pixellated and the palette looks a bit drab, but the fun gameplay and smooth controls more than make up for this. All in all, if you enjoy games like Marble Madness, you should enjoy this spiritual descendant that has plenty of gameplay to offer action experts. Highly recommended! 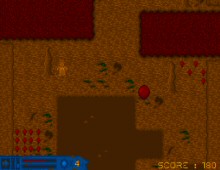 People who downloaded this game have also downloaded:
Bananarama, Beyond Castle Wolfenstein, Back to The Future III, Amazing Spider-Man, The, Ball Race