Beverly Hills Cop is an adequate action game based on the hit Paramount movie of the same name that launched Eddie Murphy to stardom. The plot is simple: as member of the Los Angeles police force, your job is to catch the bad guys, obviouly.

The game comprises 4 action sequences that can be played in order, or practiced separately. These "mini-games" vary greatly in fun factor and longevity. The first sequence is a very bland platform game. Although Eddie (you) has some cool moves such as the forward somersault, blocky graphics and boring design and monotonous level design make the experience forgettable. The 3D driving sequence after this is a pleasant surprise, with colorful scenery, simple but effective car interface, and many roadside diversions. The excitement level then drops again with the third sequence: a top-down shooting extravaganza similar to Commando and countless arcade shooters, except that here the enemies are very repetitive, and ammos are very scarce. The game closes with an interesting 3D wireframe shooter that is reminiscent of Colony and, with fluid animations and controls despite sparsely populated levels. All in all, Beverly Hills Cop is an uneven game that may appeal to fans of the movies, although it won't raise any eyebrows from veteran gamers. 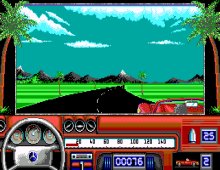